God Delivered Sissy from the Occult

God Delivered Sissy from the Occult, Saved Her, and Healed Her Spirit and Body Through The Biblical Truth That She Learned at Be in Health.

I resisted the truth for a long time

I purchased the A More Excellent Way book in 2014 and only thumbed through it. Then it sat on my shelf collecting dust while I blindly participated in one occultic program after another trying to find healing. I was lost and unsaved, living a secular lifestyle. As a result of my lifestyle, I got very sick and started a journey of looking for healing that lasted nine years until I finally heeded the urgings that I should go to Be in Health®.

I first got sick in 2007 and spent hundreds of thousands of dollars with MDs, alternative doctors, supplements, and detox treatments, but I just continued to get worse.

In 2013 while getting treatments in Dallas I found out about a brain retraining program. That opened the door to three years chock full of different types of occultic modalities.

As the spring of 2016 rolled around, I was desperate because I had just done an EMDR treatment and had a very dark, demonic experience because of it. I was more afraid than ever.

But God pursued me

My phone rang at just the right time. It was a friend that I had not spoken to in a while. She began to tell me that she had traveled to Be in Health in Georgia and was getting better. Hope began to fill me and I knew, at that moment, that I needed to embrace what I had been trying to run from.

I am proof that God always pursues us. I needed Him more than ever. His perfect plan was coming together, but I was still completely unaware of this.

How the enemy kept me from finding freedom

Someone tried to tell me about Be in Health back in 2014, but I completely ignored them when I found out it was faith-related. I wanted nothing to do with that. Yet, several times over the next two years, I would go onto the Be in Health website and toy with the idea of doing the For My Life Retreat. The enemy was giving me thoughts that I was way too sick to travel. I suffered from severe food allergies and the enemy used this to keep me close to home. So I never did act on those urgings.

My first step towards freedom

Finally, I was ready. I did the For My Life Online and began seeing glimpses of improvement. The online For My Life class was interesting because I had tons of “accusation” in my head. Lots of doubt and unbelief, but yet these truths were speaking to me.

When I heard the Occultism teaching the first time, I got offended. Then God began revealing truth after truth to me, and I became convinced that these things were true. I realized the “Universe” did not have my best interest at heart. Now I speak out against Occultism, not driven by the religious spirit, but as I feel led by the Holy Spirit. I plant seeds and let the Holy Spirit do the rest.

The best thing that ever happened to me

I scheduled to attend the Walk Out Workshop® in May of 2016. I paid a fortune to fly out my “special foods”. Soon after that, I was saved over the phone during a Spiritual Lifeline® call In June of 2016. It is by far, the single best thing I have ever done. Everything started changing for the better as I began to shed that fear that had been interwoven deep into my being.

All the healing that I’ve experienced

I live a normal life again, and I am having an absolute blast taking foods back. Thanks to Be in Health, I know that both God’s Kingdom and Satan’s kingdom work through our agreement. I practice my walkout in diligence and not drivenness, and  renew my mind every day by reading the Word of God.

I want to testify of God’s goodness

A few months ago, I returned to Georgia again, but this time it was to experience the For My Life Retreat in person because I had only done it online from my home previously. I also wanted an opportunity to testify to others what God has done for me.

It was a night and day difference from how I recall it in 2016 when I was still so lost and afraid. It brings tears of joy to my eyes when I realize that I am living out things I used to only dream of being able to do again. Glory to God. 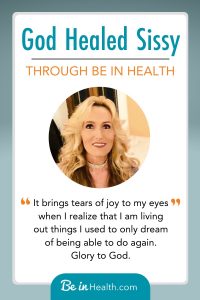 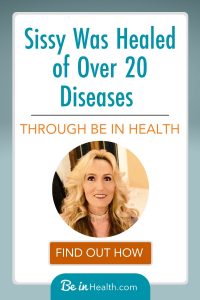 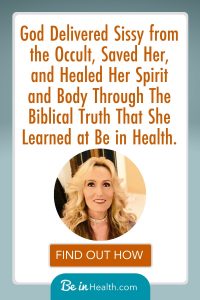