God Used YouTube to Heal Jake and Penny through the Insights they learned From the Be in Health YouTube Channel.

Did you know that Be in Health® has a channel on YouTube? In fact, we are trying to maintain a presence on multiple different social media platforms, including Facebook, Instagram, Pinterest, Twitter, and YouTube. Why? This is part of our mission to reach as many people as possible with the Word and love of God and His truth. We want to see God’s people healed and walking in wholeness in their spirit, soul, and body. That is why stories like Jake and Penny’s are so exciting to us. God used our YouTube channel to heal Jake and to bring restoration to their lives and marriage.

Jake and Penny found the Be in Health channel on YouTube. They began to watch mini teachings and conferences regularly. Then this happened:

Penny: “One day I looked over at my husband…He was wearing short sleeves. His arms were covered with about a quarter of an inch thick of psoriasis… and I noticed that it was starting to disappear!”

Now there is only a speck left of Jake’s psoriasis. Before he was healed, it had spread all over his arms and calf muscles. He would scratch it so bad in his sleep that his sheets would be bloody in the morning.

Penny: “And no medication, not lotions, just receiving the truth. My husband realized that it was an autoimmune disease that was based on him not loving himself. He started loving himself, and it started disappearing.”

A simple act of faith and humility brought dramatic results

Later they watched an interview of Dr. Henry W. Wright about PTSD. That was another thing that Jake had been diagnosed with about 30 years prior. In that interview, Dr. Wright tells the story of a military veteran who had been healed of PTSD when she laid her hands on the part of her head where the amygdala is and commanded it to come back to normal size. He then instructs the viewers on how to do the same.

So, Jake followed Dr. Wright’s instructions and also repented to God for making fear his faith instead of having Gods faith.

A miracle in the night

That night he went to bed and forgot to put on his breathing mask for his sleep apnea. Penny woke him up and reminded him to put it on. Later he had to jerk it off because it was now causing the effects that it was supposed to be helping. Everything was reversed; the machine was causing nightmares when it used to help them. It used to help him breathe, but now it was hindering his breathing. He didn’t need the machine anymore!

Jake was healed of PTSD, and a happy side effect was that his sleep apnea was healed as well!

Jake had also been on medication for diabetes and anxiety for years. He told the doctor he would eat healthier and exercise, but his levels kept on rising.

Jake: “The Lord helped me get off of Clonazepam (for anxiety) which I’d been on for 20 years.”

After all this, Jake got a blood test done to check on his diabetes situation.

Jake: “The attending physician came in and said, ‘I don’t know what they’ve been telling you, but you don’t need to be on any medication, you’re fine.’ I had made no dietary changes; I didn’t do anything extraordinary. I just started loving on myself and applying some of the principles that we learned (from Be in Health).”

Their next step of faith

Jake had received healing in all of these areas within the six or seven months that they found Be in Health on YouTube.

Jake: “It was hard for me to get there. I had a lot of resistance. I felt like we could just keep watching bits and pieces on YouTube. I used that term, ‘in God’s perfect timing,’ which was an excuse. But Penny said, ‘No…now is the perfect time.’”

The building block’s to their bondage

They are so amazed at the systematic way that God relieved Jake of his diseases. He had been plagued from childhood with different things, and over his lifetime, he accumulated one trauma after the other along with various diseases. Jake had been carrying all of this for 61 years before he finally got relief.

Jake says he hadn’t realized how it had all been piling up, but now he feels 30 pounds lighter. They finally recognized the works of the enemy and were able to overcome it through the Word and love of God and the power of the Holy Spirit.

They learned how to live successfully on earth

Penny: “When we got saved, we got the first part of the story – what you have to do to get to Heaven. Through Be in Health, we found out what we have to do to be able to live successfully on earth. That’s made all the difference in the world. We’re not victims! We’re not being put down anymore. We’re able to rise up and be the man and woman of God that He created us to be. We’re so grateful for that. Thank you Be in Health.”

An update from Jake

Recently Jake shared with us a bit more about his experience of attending the For My Life Retreat in person.

Jake: “For me, being in a set aside intensive environment for two weeks was invaluable, and seeing the team that (Pastors) Henry and Donna have built was great…It (For My Life) changed our lives and marriage.”

He then shared this exciting addition to his testimony:

Jake: “I was diagnosed with osteoarthritis, and it was so bad in my lower back that my chiropractor would not do adjustments because he said it could permanently damage my spine. I’d lived with it for years, and the first night after sleeping in the double mattress (during the Walk Out Workshop Week) I was hurting very badly.

I took our dog for a walk and told my Heavenly Father, ‘Daddy I’m not going to the pill bottle or the doctor or the chiropractor or surgery. I’m coming to you in your Son’s name and asking you to show me the root of this.’ He showed me I was bitter against Him, and I repented. The next day zero pain and none since February. I load my truck by myself almost daily as I work in the liquidation field with estate sellers with zero pain!”

What does every overcomer have in common?

Everyone’s overcoming journey is different. But there is one thing common between every overcomer; they walk in love and relationship with Father God. He is faithful to lead each one of His children on their unique journey as He helps us to defeat the works of the enemy in our lives.

Our Team at Be in Health, wants to help you get to that point in relationship according to understanding with God. That is why we put a large amount of effort into making the truth from God’s Word easily available to you through our website, blog, and various social media platforms. We invite you to follow us on your favorite platforms. You can follow the links to our pages here: YouTube, Facebook, Instagram, Pinterest, Twitter. And also, don’t forget to subscribe to our email updates (in the footer below this article)!

Did this article bless you? Pin it now! 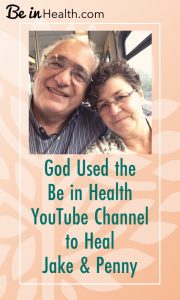 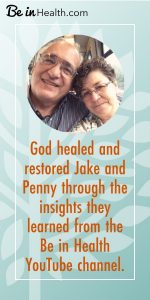