Have you ever wondered why lying and blame shifting is such a major problem? It is becoming rarer and rarer to find people who are willing to take responsibility for their actions when they sin. Many are quick to blame their actions on circumstances on other people.

At times, it may appear that this is a growing modern phenomenon. However, it is worth noting this issue is not new. It had its roots in the Garden of Eden when Adam and Eve chose to listen to the serpent and not God. Their response was to hide in fear after they ate of the fruit.

When God confronted them, they did not take responsibility for their actions, but they blamed one another and blamed the serpent out of Fear and Guilt:

Two Ways to Deal With Guilt

Ever since this point in time, humans have dealt with guilt in one of two ways. Ultimately, the dividing line is between taking responsibility or blaming someone else or something else in response to wrongdoing. Either we admit our fault and address the consequences of our actions or we shift blame to something else to justify ourselves; there is no third option.

Feelings and impressions from an evil spirit of Guilt tempt us to avoid responsibility and follow the same actions as Adam and Eve. When we make a choice to accuse and blame others, we are coming into agreement with the spirits of Guilt and Accusation. It now has a right to rule us until we decide to be honest and repent to God and begin to take responsibility for our actions.

Where We Are Today

In this conversation, it is important not to trivialize offenses and sin. There are many instances where people make victims of one another. However, when no one takes responsibility for their actions, offenses increase, and conflict has no resolution. The result is a planet that becomes progressively more chaotic as people become more and more offended with one another.

7 For nation shall rise against nation, and kingdom against kingdom: and there shall be famines, and pestilences, and earthquakes, in divers places...10 And then shall many be offended, and shall betray one another, and shall hate one another. Matthew 24:7, 10

This leads us to a serious conundrum. On the one hand, there are legitimate offenses that make victims of us, and we may even feel justified in our anger toward others. On the other hand, we live in the consequences of a world where everyone operates in the same fashion. It is a world where offenses increase, and no one is willing to back down from their position as a self-righteous victim.

What do we do to end this cycle? The answer to this question might surprise you–we choose to forgive and acknowledge our own sin. How do we do this? It is by realizing our enemy is not a “flesh and blood” human, but a kingdom lead by Satan that motivates the decisions of humans by giving them thoughts, feelings, and impressions to tempt them.

For we wrestle not against flesh and blood, but against principalities, against powers, against the rulers of the darkness of this world, against spiritual wickedness in high places. Ephesians 6:12

Did the Devil Make Me Do It?

You may think, “Are you saying the ‘devil made me do it’?” No, that is not the case. It is our sin until we repent for agreeing with evil spirits by acting upon their thoughts of temptation. God does not tempt us with evil, but we are drawn away when we are lured by feelings and impressions such as bitterness and fear given to us by evil spirits of Bitterness and Fear.

13 Let no man say when he is tempted, I am tempted of God: for God cannot be tempted with evil, neither tempteth he any man: 14But every man is tempted, when he is drawn away of his own lust, and enticed. James 1:13-14

It is important to understand that to forgive, we don’t need to justify the actions of others against us. We are not required to make what they did to us “okay.” Instead, we are deciding to separate others from what manifested out of them. The temptation of evil spirits deceived them. They chose to listen, and the result was their actions toward us.

In separating others from sin, we are acknowledging that what they did was not right while also recognizing they were used by Satan’s kingdom, often without them knowing it. By this same principle, we can forgive ourselves. When we sin, it is no longer us doing it but sin (an evil spirit) that manifested through us. We agreed with sin, but we are not sin. There is hope for us to change if we repent for following these thoughts.

When an evil spirit spoke out of Peter to rebuke Jesus, there was a vital insight that was revealed. Jesus was not calling Peter “Satan.” He was identifying an evil spirit giving Peter thoughts that he spoke out. Jesus made it clear this spirit was not Peter’s mind, but a separate entity influencing Peter.

But he turned, and said unto Peter, Get thee behind me, Satan: thou art an offence unto me: for thou savourest not the things that be of God, but those that be of men. Matthew 16:23

In ministry, evil spirits often manifest in predictable ways. For this reason, we can teach on subjects such as fear, rejection, bitterness, and envy and jealousy without having to customize teachings before every single For My Life retreat. The lies of Satan’s kingdom are the same throughout humanity regardless of background or situation.

God is the Ultimate Judge

When we forgive, we are choosing to release others to God with the understanding that Father God is the ultimate judge over our lives and the lives of those around us. No one will get away with anything, and we do not need to be our own defender.

Dearly beloved, avenge not yourselves, but rather give place unto wrath: for it is written, Vengeance is mine; I will repay, saith the Lord. Romans 12:19

Against thee, thee only, have I sinned, and done this evil in thy sight: that thou mightest be justified when thou speakest, and be clear when thou judgest. Psalm 51:4

As you read this, you may be thinking there is someone in your life that needs to read this blog post so they can change and stop bothering you. However, I desire to reach the person reading this post right now–you. We can stem the tide of accusation and blaming others for our problems one person at a time if we decide to make a change in our own life today.

If we expect others around us to love us and behave correctly before we choose to forgive and love, then we will be waiting a long time.

Are you willing to take a stand for honesty and truth and choose to stop the cycle of blaming by taking responsibility for sin? Others may attempt to make you feel guilty and diminish you for acknowledging wrongdoing and sin, but the long term fruit is health, sanity, and peace. As you separate yourself and others from what is manifesting out of them, it will give Father God a chance to work with you to recover those around you.

Also, I heard the voice of the Lord, saying, Whom shall I send, and who will go for us? Then said I, Here am I; send me. Isaiah 6:8

24 And the servant of the Lord must not strive; but be gentle unto all men, apt to teach, patient, 25 In meekness instructing those that oppose themselves; if God peradventure will give them repentance to the acknowledging of the truth; 26 And that they may recover themselves out of the snare of the devil, who are taken captive by him at his will. 2 Timothy 2:24-26

Elder at Be in Health and Hope of the Generations Church

If you liked this article, you may also like:

Pin this so you can find it later! 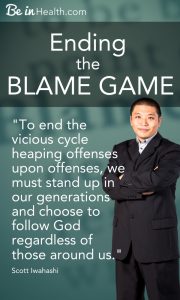 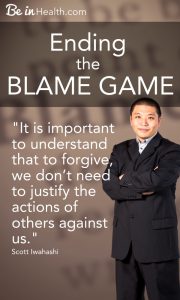