According to the medical community, the diagnosis of an autoimmune disease is more likely than not, a life sentence. Medically speaking, there is no known cause and the best they can do is attempt to reduce the symptoms. At Be in Health ministries, Dr. Henry W. Wright has identified and successfully helped people overcome the spiritual causes of autoimmune diseases with amazing results of complete healing and recovery.

According to the National Multiple Sclerosis Society, in the US alone, about 200 people are being diagnosed with Multiple Sclerosis (MS) every week! That is only one of many autoimmune diseases; that doesn’t even include, Lupus, Rheumatoid arthritis, Crohn’s disease or Diabetes 1, to name a few.

Why we get results in defeating Autoimmune diseases

At Be in Health, we have found answers and results that the medical community has not been able to come to because we look at a person, according to scripture, as a triune being. Meaning we are a spirit, we have a soul, and we live in a body. What is so often overlooked or misunderstood is the connection between these three major parts of our being.

And the very God of peace sanctify you wholly; and I pray God your whole spirit and soul and body be preserved blameless unto the coming of our Lord Jesus Christ.

Healing has to come at different levels

The medical community can only treat what it can see; but humans are so much more complex than that. What Dr. Wright has found, in over 30 years of observation and research in the medical field and of the Bible, is that how we think and what we believe, directly affects our bodies and our health. Therefore in order for complete healing to happen, a person must be healed in their spirit and their mind first, and then their body will line up.

An autoimmune disease occurs when the body begins attacking itself.

God designed the immune system with white corpuscles, killer cells, macrophages, and T-cells. These cells are able to identify rogue cancer cells, viruses, and bacteria as invaders and then attack and destroy them.

What happens in an autoimmune disease is that the white corpuscles take a command from something invisible, and it’s not the Creator. They begin to ignore the invaders that they are designed to target; they wave them on their journey through the body and say, “You’re not the enemy. The real enemy is this person.  Have a nice day!” These white corpuscles then target and begin to eat at a person’s own cells and tissues!

What is causing the immune system to do this?

We know that a white corpuscle can’t actually think or have its own thoughts. so there must be something driving them to act against their nature, which is to protect the body. At Be in Health, we are tracking an invisible kingdom that is able to trigger viruses, release genetic defects into physiological motion, and release spirits of death and spirits of infirmity. We know that spirits of infirmity exist because Jesus cast them out in conjunction with disease.

And, behold, there was a woman which had a spirit of infirmity eighteen years, and was bowed together, and could in no wise lift up herself. And when Jesus saw her, he called her to him, and said unto her, Woman, thou art loosed from thine infirmity. Luke 13:11-12 KJV

The emotional causes of autoimmune diseases

Essentially, an autoimmune disease is the body attacking the body. The body would not attack the body physiologically if the person did not attack themselves spiritually and emotionally.

What we have observed is that autoimmune disease is a direct biological result of a spirit and soul issue of not accepting who you are once and for all in the new birth (being born again through accepting Jesus Christ as our Lord and Savior check out John 3).

A battle in the mind

The enemy is coming in with thoughts that are so familiar that they sound like a person’s own thoughts. These thoughts bring guilt and shame and remind the person constantly of how they don’t measure up, how they don’t belong, and how they aren’t worthy. The enemy causes them to hate themselves, to reject themselves and to victimize themselves, bringing loads of shame. This is a major spiritual cause of autoimmune diseases.

Shame is a dangerous lie because it does not let a person accept God’s righteousness in them. It holds all of their failures and shortcomings over their head. Shame also keeps them from being able to receive the freedom that they have been given through Christ. The Word says that not even God holds those things against us once we’ve repented.

He hath not dealt with us after our sins; nor rewarded us according to our iniquities. For as the heaven is high above the earth, so great is his mercy toward them that fear him. As far as the east is from the west, so far hath he removed our transgressions from us. Psalm 103:10-12

Once a person has come into agreement with these lies about themselves, spirits of death and infirmity now have the right to join them. Therefore, their bodies respond to that way of thinking and to those evil spirits which then can manipulate the function of the white corpuscles in the immune system.

Where did these struggles start?

Maybe a person with an autoimmune disease hasn’t been properly loved or covered by someone who was supposed to. Perhaps they’ve been rejected or abandoned. For some people, they were taught that they had to perform perfectly in order to receive love. They may have even been abused or victimized by others. No matter what the case, they need to realize that Father God has accepted them and that they are unconditionally loved by Him. It doesn’t matter anymore what someone else said or did. What matters is lining our hearts up with what Father God thinks about us and accepting His love.

For ye have not received the spirit of bondage again to fear; but ye have received the Spirit of adoption, whereby we cry, Abba, Father. Romans 8:15 KJV

If you struggle with loving yourself, you need to know this: There is nothing you can do to earn God’s love. His love is not conditional on your performance, it just always is. You do, however, have to choose to accept it by faith. Any love that has to be earned is not the true love of God. It is earthly and human love- this kind of “love” is what brings fear in and is an open door for guilt, shame, drivenness, and performance.

There is no fear in love; but perfect love casteth out fear: because fear hath torment. He that feareth is not made perfect in love. 1 John 4: 18 KJV

The power you have as a child of God

We, as the children of God, have been given the power over these evil spirits. It’s time to come out of the enemy’s victimization. We are not a victim. Someone may have treated us that way but that is not who we are. God has provided keys in His Word for us to defeat this junk in or lives once and for all and to live in health and freedom.

6 Keys to defeating autoimmune disease in your life:

Physiological benefits of lining your heart up with God’s heart

When you line up how you think about yourself with how God thinks about you, then your body will stop attacking itself. (Check out Psalm 103 to see how He thinks about you). That is true freedom, friends. This is where healing from autoimmune disease begins. We challenge you, ask Father God to show you the hidden things in your heart so that He can renew your mind and bring healing your spirit and body.

Save this article for later. Pin it now! 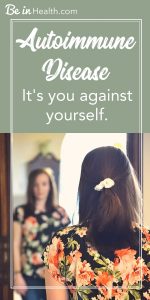 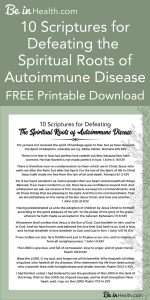 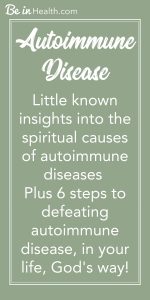