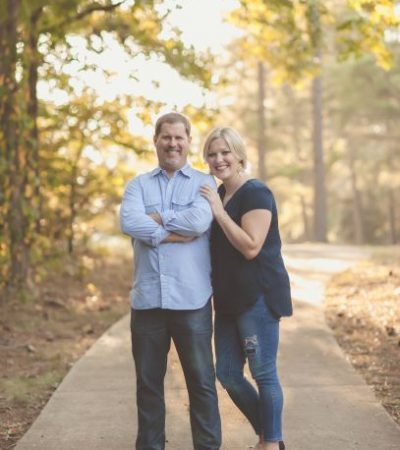 If you had told us a year ago about all of the change that would occur in our lives over the past 12 months, we would have never believed you. There were so many areas of our lives that just felt “stuck,” and we had accepted them as “just the way things are.” Coming to the For My Life Program in March 2017 completely changed our lives. Although it was just the beginning of our journey, we are so grateful to have found Be in Health in this season of our lives.

In December of 2016 we had both hit rock bottom. We were already both suffering from many health issues, our marriage was dysfunctional, and our children were spiraling out of control in many ways. After a devastating relational blow with a spiritual leader and business partner, we were completely in shock and it was the final straw.

Doug’s blood pressure was spiking to dangerous levels and he often felt hopeless and depressed about the future. Carrie’s chronic urinary tract infections had led to Interstitial Cystitis (an ongoing inflammatory condition in the bladder) and she was often in immense pain for days at a time. Physical intimacy was no longer a possibility and the only relief she felt was from special medicine that would be administered through catheter. Both of us had incredible amounts of fear, anxiety, stress, and anger about all of the situations we found ourselves in. Our children ages 11, 9, 7, and 5 were all reeling from the chaos that surrounded our marriage and spilled out into every other aspect of our lives. Even though we had been walking with the Lord for the majority of our lives and had served on ministry teams for much of that time, we had all begun to question God’s heart for us, His desire to change our circumstances, and His ability to transform our hearts.

Although we had had A More Excellent Way on our bookshelf for 13 years, we never had any desire to look at it. Doug’s dad had been to Be in Health years ago and he continued to encourage us to come. We were hesitant to trust this ministry because of previous bad ministry experiences, and because we had already wasted so much money on medicine, doctors, counseling, and alternative therapies. But since we had already tried every other modality figured it couldn’t hurt. After both of us reading A More Excellent Way, we decided to come to For My Life together.

Even in the midst of all the fear and chaos, we were able to hear many of the main messages that were communicated at For My Life. We both believed the Father’s love for the first time, we could see many of the strongholds that were affecting us and our children, we learned about how to change through meaningful repentance combined with deliverance, and we learned about how generational iniquity was affecting us and what to do about it.

A lot happened in that first week and we came home overflowing with hope. It was like turning on a fire hose and in many ways we didn’t know what to do with what we had heard. But back at home, we kept at it by putting into practice the principles we had learned during our time in Thomaston. We brought back so many resources of books and CDs, and we continued to read and listen to them, along with devouring our Bibles for the first time in years. In May, Carrie came back for the Walk Out Workshop and received much insight into how to overcome strongholds of fear, rejection, and bitterness. And then in June, we both came back to For My Life along with our four children because we figured we needed to all be on the same page. All four children attended the kids program because we wanted them to hear for themselves about the Father’s love for them and how to defeat the enemies in their own lives! Now together, as a family, we are trying to defeat generational iniquity that has bound us, and to unravel the destruction it has caused in our lives. Most days it is definitely still “three steps forward, two steps back.” There’s a lot of unraveling of wrong beliefs and actions that needs to occur, but we have tools to defeat the enemy and have hope that it is possible. Doug’s blood pressure is much lower and he is more engaged in the Godly order of our home. He has also been healed of food allergies, and his relationship with God is completely transformed in the way that he prays and relates to the Father now. Carrie is off of all her medicine, the bladder pain has subsided substantially, and intimacy has been restored. One of our sons has had major progress with a skin condition that he has had for several years. Another son has made great strides in overcoming anger and rejection in his own life. We are just so thankful to know that real, lasting change is possible. We know this journey of overcoming isn’t easy, but we are committed to knowing the Father’s love and desire for us more and more every day.

Thank you, Be in Health team, for being II Tim 2:24-26 for us. We had never seen this type of meekness and gentleness in church leaders before. Thank you for sharing your journeys with us so that we can learn from them. Thank you for giving us the opportunity to recover ourselves out of the snare of the devil. All six of us look forward to coming back to learn as much as possible over the next several years, and to doing the work of overcoming in our generations and beyond.