Healed of Allergies and Pain! 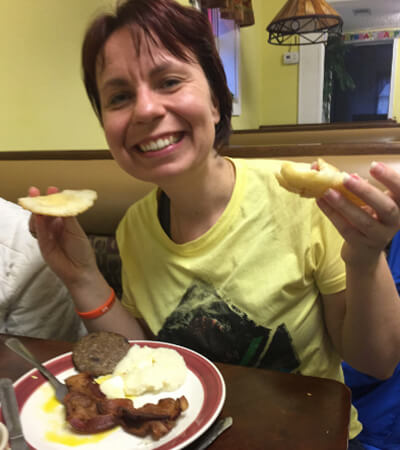 Many of you will probably be able to relate with my story and hopefully will share the same testimony too after going to Be in Health® for a For My Life® Retreat and Walk Out Workshop®. Definitely do both if you can because even though I was healed the first week, it was in the second week that I was transformed and my heart surrendered.
In September 2015, I had just crossed the Portland Bridge and the thought crossed my mind, “if you jump it will all be over”. I had never given suicide a thought in my life, where did that come from?!?

Gratefully, I was on my way to see a friend and was able to share how upset I was. I had “done” practically everything I could and been told to do. I hadn’t eaten certain foods (some of you will know exactly what I am talking about when I say, gluten free, dairy free, egg free, no night shades, and so on).

I had taken the supplements, gone to naturopaths, doctors, chiropractors, counselor, and read more Christian self-help books than I could keep track of. Still I was not getting better and now this suicidal thought. I literally was down to a handful of foods I could eat without having an allergic reaction and was taking four ibuprofen every three hours to not be in pain. Nothing seemed to be working and I was frustrated, desperate, angry, and wanted answers.

My friend let me rant and then said, “Okay, you are ready”. “Ready for what?” I asked. “Be in Health” they said. I had heard their testimony and of their time at Be in Health and something in me knew it was time. Timing, I think, is everything. I had to come to the place where I had done all I could do.

A month later I arrived in Thomaston, Georgia. Two weeks later I left healed of all my allergies and delivered from what was causing my neck and back pain.

With knowledge comes responsibility. That first week I learned of the Father’s love for me and how I had sinned against Him and the power of repentance. I believe repentance is truly one of the greatest gifts because in a moment you can be free. I realized so many lies I had believed about myself, others, and God. Amazing breakthrough came in that first week. His truth makes you free.

In the second week, I really owned the truths I was learning. I also realized I could read all the books, listen to the CD’s, practice the 8 R’s, but unless I surrendered my heart to the Lord and really trusted in Him, believing His word; I would be right back where I had been when I came, tormented by fear, anxiety, doubt, and bitterness.

On the evening of October 13, 2015, after much struggle, I surrendered. I want you to know, it was a fight. I had believed so many lies against the Heavenly Father and to trust meant I was going to believe He is love, has my back, His plans for me are good, and His Word is truth. I remember sitting there asking the Lord to help me surrender because I no longer wanted self on the throne of my life.

It was in those prayers a vision of me as a little girl with a treasure box in my hands came to mind. In it I knew was my heart. I was walking toward whom I knew was the Father and was overcome with how much He loved me, His tenderness and that I could trust Him. “…Perfect love casts out fear…” John 4:18. My fear of trusting Him with all of me was cast out. I surrendered and I continue to do so daily. I trust Him.

It’s been almost four years now and I have no allergies, scoliosis healed, neck and back pain gone; but more importantly I have freedom. His truth applied daily sets me free. I learned many truths at Be in Health that I had somehow missed along the way growing up in the Church. Truths that help me daily overcome the lies of the enemy and help me to love and live as He calls me to. I am a new creation and have been forever changed by the teachings received at the For My Life Retreat and Walk out Workshop (WOW).
-A. Johnson