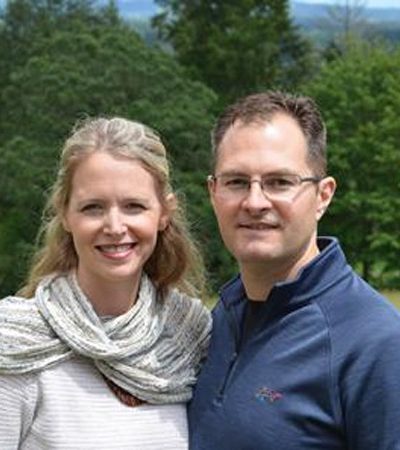 When I was in my 20s, the eating disorders I developed in high school faded away only to be replaced by a diagnosis of generalized anxiety disorder and obsessive-compulsive tendencies. I tried anti-depressants, but they only exchanged old symptoms for new ones. When I was in my 30s, I was diagnosed with hypothyroidism after giving birth to twins. Two years later, I had a second set of twins. I suffered with extreme sadness and was diagnosed with postpartum depression. I was told this was very common and given more anti-depressants. We tried psychotherapy, which didn’t help. My doctor told me that the reason psychotherapy didn’t work for me was because my problem was a chemical imbalance that needed medication. The medication did not work for me either.

I developed severe breast pain at age 38. A mammogram revealed benign growths, and fibrocystic breast disease was diagnosed. At the age of 39, I developed chronic pelvic pain. It came on all of a sudden and I was convinced I had injured myself at the gym. After multiple doctor opinions and tests, it was determined the likely cause was a prolapsed uterus and a hysterectomy was recommended. I wasn’t convinced this was the cause, but I trusted the doctors and had the surgery. Weeks later, once all the pain medications wore off, I still had the original pain. Over the course of a few weeks, this pain intensified. The doctor thought I must have developed an infection from the surgery. I was given anti-biotics/anti-fungals, but I had severe abnormal reactions to these treatments. I then developed yeast problems and non-bacterial inflammation of the bladder. This all was very traumatic for me. It was a huge doorpoint for fear, anger/un-forgiveness towards the doctors, and an opportunity to beat myself up over agreeing to the surgery. This was the turning point for a rapid decline in my health.

I saw traditional doctors, alternative doctors, psychologists, and a naturopath. I was diagnosed with insomnia, food sensitivities, TMJ, PTSD (from the surgery), adrenal fatigue, hormonal imbalance, chronic dry eyes, dysautonomia and Raynaud’s syndrome. I followed advice to go on a very restrictive rotation diet. I also did colon cleansing, acupuncture, herbal supplements, chiropractic, counseling, tai chi, yoga and sauna treatments. I had paradoxical reactions to most treatments and supplements given, and only received new symptoms. The more I tried to get well, the sicker I got. I didn’t have any hope of getting well, and I was full of fear. I was so confused. Why did this happen? Why would God bless me with two sets of twins and then give me all this sickness so I couldn’t care for them? I thought if I was sick then it was part of God’s plan for me to fulfill His divine purpose. My whole life I had been led to believe bad things come from God for good reasons. We were just to trust Him, and one day we may know why. I prayed the only way I knew how to and sought prayer from others, but I didn’t really believe my body would be physically healed. I thought God’s healing meant that I would just feel better and be at peace with my situation. There was a healing prayer ministry at my church that I would visit weekly. It was the only place I found any comfort during this time. I know these prayer partners believed in physical healing, but it was new to me and difficult to grasp.

I was isolated in my house. I had to wear a mask to go anywhere because of severe reactions to perfumes and paints, and an overall hyper-sensitivity to smells. I had to eat my special foods and I spent two hours a day on oxygen. I could barely muster enough energy to go the mailbox. We had to hire a lady to help at the house with my kids and to prepare food for my family.

Thankfully, God led me to a compassionate doctor who was accurate in the diagnosis of Multiple Chemical Sensitivities (MCS). She referred me to a clinic in Dallas, Texas that specializes in environmental illness. My husband and I made arrangements to go the next month. A few days later, I received a message from a friend whose father-in-law wanted to share some information with me; she had shared my story with him. Even though I didn’t really feel like talking about my situation with some man I didn’t even know, I listened to the Holy Spirit and I contacted him. This man shared with me his miraculous testimony of being healed of MCS. He had been given only two months to live by the Mayo Clinic, yet here he was sitting with me many years later in perfect health! He told me about Be in Health® and gave me his copy of A More Excellent Way by Dr. Henry W. Wright. I poured through this book and the testimonies flooded me with hope.

In our first step of faith, we cancelled the appointment in Dallas and registered me for For My Life®. I’ll admit, I had doubt and a backup plan to go to Dallas. However, God honored our faith and met me in a big way. During For My Life®, I recognized I had put all my trust in doctors and medicine to heal me; I was seeking doctors for things for which they were not capable – the only medicine that would heal me was God’s truth.

My son, attend to my words; incline your ear to my sayings.  Let them not depart from your eyes; keep them in the midst of your heart. For they are life to those that find them, and health to all their flesh. Proverbs 4:20-22.

My eyes were opened that week and it gave me the hope that things could change. I had thought if God healed me it would have to be a sudden miraculous thing. What I have learned is that it is often a process over time. Pastor Henry says, Three steps forward and two steps back is still forward progress. So is my body 100% healed? Not yet, but I’m believing for it! I am encouraged with Romans 8:25, But if we hope for that we see not, do we with patience wait for it. I am in the journey of overcoming day by day.

As my husband and I have been lining up our lives with God’s word, there has been much good fruit. I’ve been able to care for my 4 young children—even homeschooling part-time. I am able to go freely anywhere I want. I don’t have to live in fear of the environment or symptoms. I can get out of bed every day without being depressed. I no longer walk around dizzy and fatigued with random symptoms all day long. I don’t have constant pain in my neck, back and face. My last 3 cholesterol tests were normal. I’m now sleeping 7 to 8 hours most nights! My eye prescription has improved and proper moisture has returned. I haven’t experienced symptoms for Raynaud’s, nor have I had breast pain in three years. I’ve gone from seeing a doctor constantly four years ago, to going twice a year for a thyroid checkup, and my thyroid levels have stabilized greatly.

Our children are walking in more freedom also. Two of them used to be constantly plagued with a multitude of recurring infections; one child would get asthma symptoms with every infection. At one point, I remember three of the four children sitting all day with breathing treatments. Since I went to For My Life® in 2012, none of the children have been on antibiotics, they have no more asthma symptoms, and they rarely even catch a cold! Three children exhibited speech issues and they are making excellent progress out of this. One child exhibited anger tantrums frequently and those have simply disappeared. No specific prayers were prayed or ministry performed. When my husband and I changed our spirituality, it transferred right along to our children.

God is faithful. What He has done for me and for many others, He can do for you.

The Lord is my strength and my shield; my heart trusted in Him, and I am helped:  therefore my heart greatly rejoices; and with my song will I praise Him. Psalm 28:7

I’m grateful and thankful to: Father God for His truth and love, the staff of Be in Health® for their compassion and wisdom, Dr. Susan Tanner for being so gentle and open-minded, and my friend, Al Montreuil, who shared his testimony and gave me my first glimmer of hope.

By the way, I never went to the clinic in Dallas!